How Getting Preapproved for an Auto Loan Benefited a Bro

Have you ever bought something for the show, but not because you actually wanted it? Some people decide on Gucci while others purchase items with an outrageous price tag. Florida is definitely a place for show and was definitely no different for Rico.

The type of guy you’d find carrying a gallon of water around the gym and meal prepping like his life depended on it, he’s also the type of guy who likes to impress. Why else would he have a perfectly taped hairline and muscles harder than a rock? However, as much as he likes to impress unfortunately he can’t say the same for his car…anymore.

A couple years out of college he decided to save up and put a decent down payment on a used BMW. Remember, we’re talking Florida so the brand is everything. Well, unfortunately the car is having some issues now that he’s looking to trade it in, which is getting kind of difficult when it comes to financing. So how was this guy’s prayers answered? By a woman of, course.

Millennials have definitely made the headlines for the way they date, so naturally Rico isn’t one for commitment, but he is one to take a girl out to the movies. Which is how this all came about. He met up with one of his old friends for dinner before catching the newest flick and they got to talking about what’s happening in each other’s lives. He shared his frustrations with trying to buy a new car in Miami and how the dealers weren’t cutting him some slack. Typical, right? 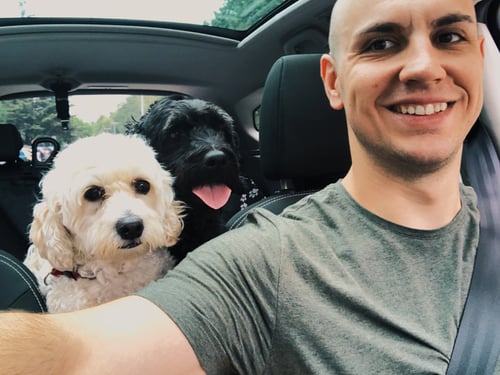 Being the good date/friend she is, she gave him a suggestion that basically blew his mind. She suggested that he skip the dealership and try getting preapproved for an auto loan instead. She only knew this because she works as a secretary for a local dealership and sees customers come in with auto loan preapprovals all the time.

Besides this woman clearly being wife material, she made a couple good points why he should look into getting preapproved for an auto loan. Here they are:

Rico decided to go ahead and get preapproved for his new auto loan from a credit union (thanks to a really attractive Facebook ad) and once he did, it made picking out his new car a lot easier. Instead of having to fit the budget to the car, he fit the car to the budget.

What we mean is that with his preapproval he already knew how much he could spend on a car and already knew approximately how much the monthly payments would be.  Having this information in advance meant he had an idea of what cars he could afford and he wouldn’t have to fight tooth and nail with financing from the dealership.  Rico literally walked into the dealership with the preapproval document and told the dealer he was interested in a Toyota Tacoma and then focused on getting that truck at the right price.

Despite having put a nice down payment on his BMW, Rico still was upside down on his loan, which when he originally went to the dealership before being preapproved made it difficult for the financing he wanted. Of course the dealership was making it work, but not at the price he wanted to pay. This is where the credit union helped when the dealer wouldn’t.

Instead of explaining to him what he could do to not be upside down on his loan, they ended up losing a sale because he was not about to pay $700 a month for a car payment. Would you?

Having worked with a credit union, they gave him some quick tips he could use to work out the financing in a short amount of time so that his monthly payment wouldn’t be so high.

Negotiate the Price of the Car

By negotiating the price of the car, the loan becomes a lesser amount. With a lower loan, this will naturally bring down the month to month payments. This also tends to be the easiest way to lower month to month payments, as dealers negotiate the price of the cars all the time, whereas financing is more dependent on how much money you have and your credit score. Things that are a little harder to change in a short amount of time.

Sometimes it’s beneficial to extend the terms out especially if you know you are going to have the car for a while and rather pay less month to month. Traditionally, this is what lenders will do if that’s the goal for a borrower. We are aware that a borrower will end up paying more overall on the loan due to interest, however the credit explained to Rico that later down the road he could also try to refinance in order to save on the overall costs.

In a short amount of time this can become a little more challenging. However, in this case Rico had a car he could trade in. He didn’t like the price the dealership was offering him for the car, so the credit union suggested he sell the BMW for a price that he could pay off his old loan with (so he wouldn’t be upside down) and any additional earnings from the sale be used as a down payment on his new auto financing.

Rico isn’t one to sit around and wait, he has explained to his friend how frustrating it was to have spent hours at the dealership with nothing to show for it.

Her response this, was that when people who had preapprovals came into her dealership their time spent there was minimal since all they had to do was bargain with the price of the vehicle.

The majority of the time people spend at the dealership is negotiating both the price of the car and the financing. By getting preapproved from a lender over a dealership, Rico had the benefit of knowing what he could do to get the financing he wanted, so instead of going back and forth like he would have at the dealership he already knew what was expected from the credit union which helped shave a lot of time off of going back and forth.

We aren’t saying that getting preapproved is always as easy as this sounds. Rico had to jump through some hoops to get his financing where he wanted it to be, however the idea was a breeze and by taking a different approach helped out his car situation A LOT.

In the end, thanks to the advice of a woman Rico was able to get a pretty fair deal on his auto loan financing and also ended up in the car that he wanted.

Next time you find yourself in a sticky car situation get beyond the car loan, think outside the box and be a Rico. Who knows, maybe doing some research could really end up being a benefit to you.