Who knew divorce could take such a toll on your finances. Danny has learned that over the past years and while bouncing back hasn’t been easy, it hasn’t been impossible. He’s learned how to adapt to his new situation and has gotten creative with finding ways to ease his finances while trying to put his divorce debt behind him.

Danny got separated and divorced nearly two years ago, but has had some blemishes and unwanted debt following him around from that time. Unfortunately, this has caused some issues, particularly when he went to buy a new car. His lease recently ended and due to his situation was so desperate to get into something, he decided on the first thing that was made available to him.

As desperate times call for desperate measures, that doesn’t always mean they are the right ones. Danny walked away with a lightly used SUV and a 16% interest rate that really burned a hole in not only his wallet, but also his heart. Times are hard enough, so the thought of paying that much interest on something like just a car didn’t sit well with him. 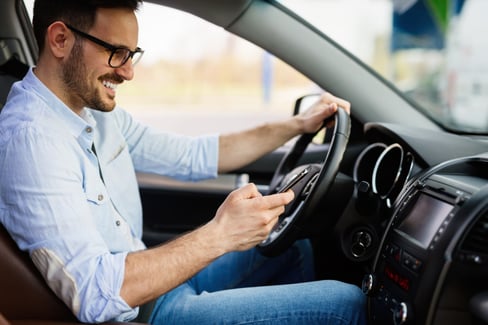 Danny has been doing group chats with his friend group lately and shared with the group just how surprised, but thankful he was to have gotten financed. All his friends have been there for him during this time, so they understand how important it is to him to feel like he’s moving forward. The thing that all his friends got on his case about was the super high interest. Sixteen percent is a very high number to pay on an auto loan, regardless of any financial situation. However, sometimes this is how things happen, but that doesn’t mean there’s not a way to ease it.

One of Danny’s friends told him about Get Beyond Money and how one of her friends, a young married couple, have benefited from their resources. She advised he check out how they could help and see if he could do anything to free himself of the burden of having to overpay on his auto loan.

Long behold Get Beyond Money had just the resources Danny was looking for. He was able to take the Get Beyond Money Savings Quiz, to see how much Tropical Financial Credit Union, GBM’s financial resource could save him. He spoke with a Tropical Financial Credit Union team member who advised Danny that an auto loan refinance could help not only bring his overall interest rate down, but the monthly payment he was paying each month would be lowered too.

This was a huge help to him because not only was he lowering a monthly payment, he now freed up some other money he could use to put towards his divorce debt.

The process to refinance his application was easy and painless. He applied at-home, online and to keep organized used the Get Beyond Money Auto Refi Checklist, which was a huge help as he didn’t have the ability to have someone with him every step of the way due to social distancing. Danny ended up getting approved at a much lower rate than the original sixteen.

Divorce is never fun, especially when it hits hard on your finances. Danny learned a big lesson that sometimes even if you’re desperate, taking the time to look around and rate shop can help to fuel a better, more secure financial future.