Have you ever been at the mall and walked by a shirt you knew you couldn’t pass up? Did you also look at the price tag and know you shouldn’t be spending that money right now? Did you end up buying that shirt anyways?

It’s not a crime to say yes because many of us have been there, however there comes a point when doing this becomes excessive. Take two, South Florida sisters that can attest to this first hand. Gabby and Cristina are no strangers to an impulse purchase and they are certainly no strangers to struggle due to credit card debt.

Gabby and Cristina are your average young, out-on-the-town city girls. The city life typically includes charging on the credit card because let’s be real, that $50k job a year and multiple dinners out a week along with designer shopping trips don’t quite add up. These sisters both were in the same boat of not making the best financial decisions and it started to show.

Gabby wanted to buy a car and couldn’t get the one she wanted because the payment would be too high, which would cut into her already high credit card payments. Also, thanks to having to make those payments she didn’t have a big enough down payment to lower the monthly car payments. In a nutshell, her debt was starting to catch up to her in more ways than one.

Cristina on the other hand was trying to save up enough money to buy herself a condo instead of having to keep renting with her sister. Well, how are you supposed to save up when you’re trying to pay off and on top of that how are you supposed to get approved for a mortgage when that lingering credit card debt is keeping you from getting approved?

These sisters are smart. They are able to acknowledge that there was a problem and they were ready to stop, but they needed some guidance to help get out of this mess. Their friends recommended checking out Get Beyond Money and seeing how their resources could help them out. They were able to find tools to help focus on paying down balances and eventually paying off their credit card debt. 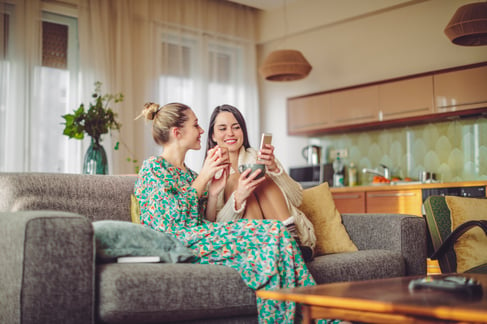 Their GBM resources suggested to gather all their monthly expenses using the GBM Monthly Budget Planner to factor each of their credit card balances into their expenses. The budget planner helped to visualize just how much of their monthly budget was being eaten up by credit card payments. It helped put into perspective how much more they could be doing, things that are goals for them, but are being held back because they haven’t had the right mindset to turn their problem into a solution.

Once they were able to visualize their problem areas, they were walked through organizing their debt. This is a key step when going from plan to action because it helps to keep things simple and easy. Their GBM resources suggested they keep a log of their credit cards with the ones that have the smallest balance at the top and work their way down logging the ones with the next largest balance, eventually leaving the credit card that has the largest balance at the bottom.

After the sisters visualized and organized, it was time to strategize how they were going to pay down this debt. Naturally from the organization they were leaning towards the smallest balance first, but their resources advised to start with that method, but on a card that isn’t used for everyday purchases.

Each of the sisters started with their store cards first since they committed to pausing the majority of shopping trips until they could pay down the balances and see some turnaround in their finances. If they knew they were going to purchase clothing or multiple iced coffee trips that would now come from their “spending budget” and instead of being charged on a card, they would use their debit card for those purchases.

Ultimately, this method checked out because the debt wasn’t going to reappear, so by them eliminating those balances they were also helping to increase their overall financial health which is just the first step to meeting their goals.

Gabby and Cristina were both able to pay off a few low balance credit cards and are now working to pay down some more credit card debt. GBM saw an opportunity to teach them how to use their credit cards more responsibly and started by touching on interest rates.

Paying interest on a credit card can be frustrating especially when the balance is high and you’re already struggling to make the balance itself, how are you supposed to tackle extra payments on top of that? Their GBM resources suggested a balance transfer to a card that doesn’t have an introductory period, so they can pay off as much as the balance they can without having to worry about interest payments. This also opens up how much credit they have and since they’re paying down balances that helps to boost their credit. If they don’t pay down their balance by the end of the introductory period, it was also recommended they then take it a step further and do another balance transfer, this time to a fixed rate credit card, so they can save in interest by not having a fluctuating rate. With the particular card they can also earn rewards on any additional purchases made, which can be redeemed for statement credits.

Now, the sisters have managed to pay off and pay down the majority of their balances, earn rewards on their future purchases, boost their credit scores and save money to reach their goals. We’ll call this one a win.